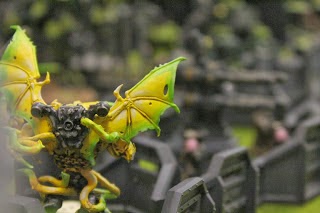 The past weekend I played at an 18-man local tournament held in Lauttasaari, by NjT. The missions were similar to BAO, just with battlepoints. Primary objective 4 points, secondary 3 and the rulebook secondaries each worth one. The difference between the two players gave each a score between 0 and 20. Here was my list:

Nice and simple. I slept in and missed the first round, rightfully getting 0 points :D.

I was playing against IG/SW. A 50-man blob (that didn't combine in the matchup), marbo, 3 vendettas, 2 manticores, LRBT, 2 runepriests and pod with hunters. CCS, PCS and veteran squad went into the vendettas. Mission was Relic (4), Big guns (3) with vanguard strike. I went first, blew up both of the manticores with flickering fire side shots, as they had deployed too far forward. Then I flew off with all but fatey, anticipating the vendettas. I came back ensuring the vendettas would overshoot. They in turn flew off. T4 step one, I grimoired fatey and cast invisibility on all the DPs. Next step, clip area terrain. Third step, 4 guys with 2+ rerollables. Like a boss :D. T5 I took the relic with daemonettes, held an objective with plaguebearers and contested his objectives. Didn't get slay the warlord, so 19-1. The guy was new to 40k (although he's played FB) and felt a little lost with all the daemon shenanigans. He would win best painted.

Necrons with dual wraiths and d-lords, triarch stalker, immortals and 2 warrior squads (no scythes!!!), 2 annhi barges and a doom scythe. We played crusade (4) and emperor's will (3) with dawn of war deployment. He seized on me and shot the grimoire prince down to 1 wound. Prince would play keep away and since fatey had rolled misfortune, I went to work on the wraiths with the rest. He didn't ground me, I pounded the crap out of him. Epic movie moment: fatey was grounded and caught by the warlord and wraiths. being the fluff bunny I am, i challenged the dlord into a dual of the warlords. Next round the bloodthirster rolled in, allowed fatey to take the MSS and made a heroic intervention, netting me slay the warlord. I lost 1 prince, maybe the thirster can't remember. In the end I had all the points, 20-0.

My original opponent was a no show for day 2. The organizer played me instead. Another 3 vendettas (with veterans),  3 plasmavets in chimeras, plasma ccs in chimera, demolisher and manticore. Purge the alien (4), scouring (3), vanguard strike. It was nightfight so i gave him first turn and deployed out of los, over 36" from the manticore. Fatey flew up with iron arm and 2++, the rest flew off waiting for the vendettas. I couldn't pass a grounding test whole game. T2 it didn't really matter, fatey wasn't dying any time soon. T3 mr. thirster almost felt like giving up first blood (luckily didn't). T4 the grimoire prince took a demolisher to the face. T5 the thirster did infact bite the dust. However, by the end of t5 I had destroyed all the vendettas and forced the CCS to flee. I killed 2 of the vendetta vet squads, the last passed their ld5 against nettes in combat keeping linebreaker. I let him have one objective (all were worth 2 points) and contested the rest, earning me all the points. KPs didn't need counting, I had squads and transports plenty with only 7 units in my entire list. His linebreaker meant it ended 19-1.

Taudar: buff commander, 1 skyfire bursttide, 1 iontide, 2x kroots, 3 broadsides with missile drones, jetseer, 2x davu in serpents, 6 warpspiders, wraithknight. Big Guns (4), relic (3) with hammer and anvil. Big gunz is a little tricky for me. it gives me great mobile scoring, but it also means I bleed points from my princes. That's why I prefer scouring. Anyway I give my opponent 1st turn in nightfighting and deploy 3 monsters (fatey, grimoire and the non-exalted prince) out of range of all but his single iontide. iontide does a wound on the grimoire. Fatey powers up with 2++, heading down a flank and eyeing the spiders for first blood. The rest fly off. 1 Spider survives fatey. One of his kroots comes on from outflank, right next to fatey.

My t2 everything comes on. Nettes lose 7ish to intercepting but none of the monsters are aimed at. I focus on the kroots, bringing them down to below 25% and breaking them. Still no first blood. It got super intense when my opponent was pounding my grimoire prince t3 (brought it down to 1 wound) and only had the resources to bring the nettes down to 2 models remaining. The second kroot squad came up on the opposite flank to the last one.

All FMCs flew off. My premium assault unit, the plague bearers, took invisibility and charged into the kroot. 3+ to hit (and 5+ for the kroot) coupled with poisoned saw the kroots obliterated. First blood!!!! My opponent was just left with lesser daemons to shoot at, killed all but 1 plague bearer. My t4 saw all the FMCs come one. Dropped the portaglyph and spawned 6 nettes. Intercepting forced me to use the fatey reroll to keep the grimoire alive, fatey failed grimoire. I finished off the lone spider.

T5 my opponent killed off fateweaver and snatched the relic with some avengers. All game I'd been trying to puppet master the wraithknight to kill the burst tide. Unfortunately, no 6s to wound were rolled. I had stripped a couple of wounds with flickering fire but also given him a 5+ fnp (need to do some math and figure out if it's worth using flickering fire to strip wounds off a wraithkinght). Now I grimoired a warpspeed reroll invul prince and went into the wraithknight, assisted by the 6 nettes from the portal last turn. He was sitting on an objective and worth a point. Brought it down to 1 wound (damn you fnp!!!). Thirster was let lose on the bursttide and commander (who had monster hunter, not stubborn). He rolled 3 sixes to wound and instagibbed both of them giving me slay the warlord. Flickering fire killed the avenger holding the relic.

Game went on to t6. My opponent killed off the thirster but despite his best efforts the grimoire prince wasn't gonna stop partying. he did get grounded and was charged by the jetseer. I finished off the wraithknight, securing big guns and killed off the avenger who'd again picked up the relic. One FMC also flew to get linebreaker. The grimoire prince might have died to the jetseer, it wasn't relevant. I got all the rulebook secondaries and big gunz, neither had relic and he had slay the warlord and linebreaker. 15-5 victory.

I wrote a more in depth report of the last game since it was the most intense, and it was a good test of evasion as a tactic against taudar. Some minor things both of us should have done differently, but overall it was a great game. It came down to those critical 2 shooting phases (t3 and t5) where my opponent just couldn't do quite enough damage.

Almost forgot to mention my final standing. Due to the small amount of players, battle points and sheer awesomeness the daemons flew in 2/18. Closing thoughts? Troops are for pussies, min troops ftw. Playing with 5 models is awesome! Piotr was wrong in saying that herohammer isn't fun. Seriously though, I've come to the conclusion that FMC spam always pisses off either the daemon player or his opponent. Due to the nature of the rolls, the daemon player will only get pissed off 1/3 of the time whilst his opponent will be glowing 2/3 of the game.
posted by Unknown at 12:05
Labels: Daemons, Tournaments

My blog on everyhting related to 40k, along with some guest writers.